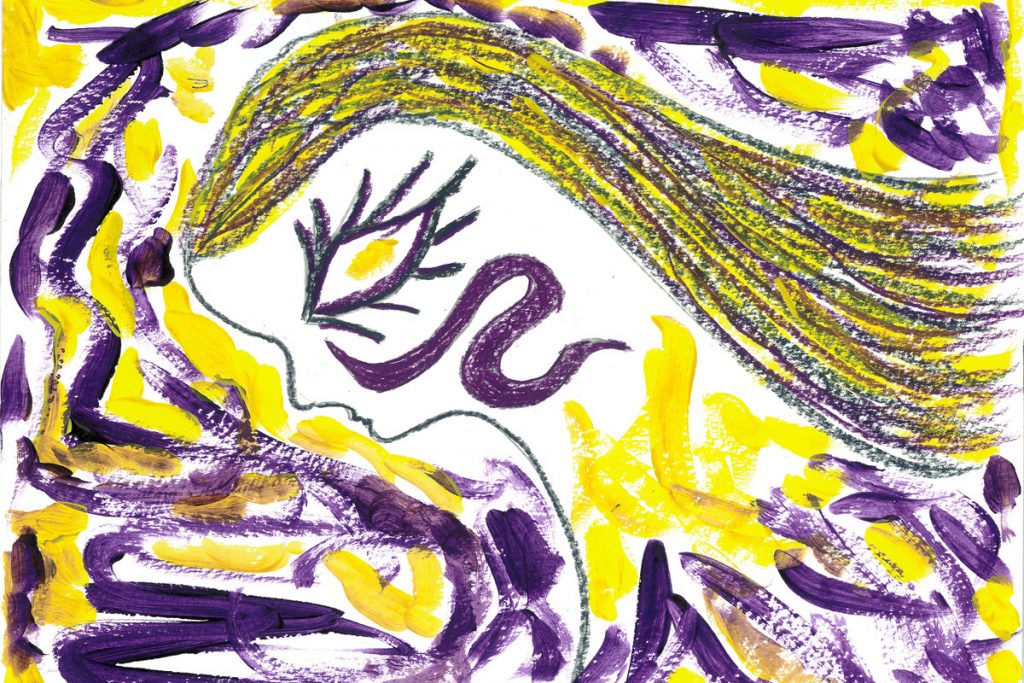 The images of the dreams

“In a room full of books and plants two people talk to each other, suspicious of me, the books are almost suffocated by luxuriant plants, like in a greenhouse.”

“Two colors, yellow and purple, appear in the screen of my mobile, to signal the increasing curve of the virus.”

“In a big terrace surrounded by walls there are some bas-reliefs, it could be in Petra; a cat scratches the sand and the bas-reliefs disappear, there’s only sand now, I stand in disbelief, can’t do anything.”

“I’m in a garden facing an ancient column, above me is a caryatid with a woman shape, I take a photo.”

“I’m in the Jerusalem Casbah, four people I know steal my camera.”

“I’m at the opening of a big new space, surrounded by many people, among them a seductive man, the Italian singer Caparezza is singing the song The Prisoners.”

“I am in a Peruvian shop full of beautiful shell-made jewels and necklaces.”

“I’m at work, half naked, I wear only trousers, everyone starts laughing and suddenly I realize I’m wearing my wife’s trousers.”

“A boundless beach skirted on one side by woods, I’m walking with my mother and a child, I see a man hiding to exercise, pools of water are hidden in the middle of the wood with many people bathing.”

“I’m in the old bus of my actors group, a very special vintage car full of fancy goods, I would like to take some with me but I can’t.”

“The death of a friend, I look out of the window at a beautiful snowy landscape, someone is ski-mountaineering in a slope of fresh snow, it could be me, an invisible trace of the skis in the soft knee-length snow.” In the online Social Dreaming Matrix of April 1st the recurrence of the number 2 in the dreams constellates the themes of separation and reunion, of the difference between the masculine and the feminine, underlining the need for a renewal of broken bonds.

The number 2 is feminine, passive, receptive, in the I-Ching represents the yin principle linked to the magnetism and receptivity of the Earth, as opposed to the masculine dynamism of the yang; the polarity of the 2 refers to the difference between the masculine and the feminine, to the possibility of their reunion as well as to their inevitable contrast.

The number 2 is the number of the couple, of intimacy and harmony; but also symbolizes being stuck in a situation, still by incertitude, struck by the need to surrender to the immutable laws of nature. The number 2 emphasizes the creative principle of the feminine, the capacity of blending together spurious elements, cooking them in a crucible, a generative space of containment.

The duality inherent in the number 2 reminds in the Matrix to the opposition between Nature and Culture emerged from the dreams; but is this opposition, today, still generative?

Mankind in his Promethean anxiety succeeded for millennia to overcome the power of nature; today however, the natural forces seem to have unexpectedly escaped from control, and the dreams depict a surreal scenario in which the archeology of the past and the most beautiful artifacts of the human culture are annihilated by a powerful nature that suddenly takes over, erasing the traces of the human culture.

In the dreams, a cat scratches Petra’s bas-reliefs turning them into sand; a tire is incorporated into a big tree; we walk on empty highways winding through forests and deserted beaches; wolves, pigeons, fawns take possession of the cities. An impending nature aimed to steal all our spaces threatens the ancient historical monuments of our culture, the collective symbols of civilization and power.

Stranded in a surreal landscape similar to a day-after scenario, we struggle to find a new order in chaos. The once well known landscapes are now a foreign land we don’t recognize, all the familiar landmarks have vanished, we don’t know how to walk in the streets of our cities, we feel awkward and clumsy.

The contrast between Nature and Culture appears in dreams through the images of the monuments of an ancient past threatened by a revengeful nature that claims back its power; and we suddenly realize how much we miss the collective side of culture, the set of rules, customs, habits, traditions handed down from generations that made our common history.

The places and landscapes appearing in dreams – Petra, Jerusalem, the medieval villages, the caryatids – represent a well-known, reassuring, well ordered world, capable of lasting over time; a world which is now threatened of disappearing like the Petra’s bas-reliefs that disappear under my eyes.

We need a “social glue” to stick together the pieces of a culture that is crumbling down. But the collective guidance vanished as well, what is left is a weak power expressing itself through random “edicts” – Conte, the head of the Italian government, tells me in private “You can go out if you want …” with a confidential tone -; or the unnecessary coercive power of the Caparezza’s song The Prisoners.

Culture and power look like two empty boxes witnessing the chaos and confusion of the collective.

We are locked at home, while in the outside world the nature has taken over, all the spaces that were previously occupied by humans are now at the mercy of the natural kingdom: roe deer and fawns invade the streets, wolves return to the city, pigeons make their nest in empty nurseries, in a library the plants cover and suffocate the books like in a greenhouse. Humans have disappeared from the scene. An apocalyptic scenario reminiscent of the dystopian worlds of many movies – we mention I’m a Legend with Will Smith where the world is populated only by zombies – recalls biblical disasters, like the Noah’s Ark and the Great Flood.

The inner experience is contained in small spaces where we try to find a shelter, the wardrobes and drawers of the house where we find old objects, forgotten precious jewels, memories of the past.

We are mourning the loss of a safe world; two colors, yellow and purple, alternate to recall the blossoming of the upcoming Spring and the exponential curves of the daily ascent of the virus.

Locked at home we feel like prisoners, experiencing a deep sense of oppression for the timeless confinement – the leit motif of the Caparezza’s song The Prisoners is “end of sentence, never”-.

The mood is intimate and nostalgic, wandering around in the house we find small treasures, colorful necklaces telling stories of faraway countries, precious forgotten objects full of happy memories, a very special van for traveling with friends long time ago. Death and life remind one to the other, but still remain two worlds apart; looking through the glasses of the house window I see a beautiful ski-slope covered with fresh snow, and this view reminds me to the death of a close friend.

Chaos and Shelter oppose, featuring the subversion of rules, and their overturning brings to a great confusion; outside, the world turned in a hostile habitat we don’t understand.

In the dreams we see people swimming in the subway, we take part to the opening of large spaces in which shoe-shops display removable paper-cakes supposed to be design objects; in the squares of the city too many people stay too close, drinking coffee and walking in the streets like crazy; we see people on a cruise and wonder why they are not working, we go to presentations crowded with people where the speaker doesn’t show up.

We feel awkward, inadequate, we don’t know how to behave. We are late to the presentation where we know they are waiting for us but we don’t have a proper dress to wear, when we wear trousers they are the wrong ones, our clothes are too informal and they don’t fit for work.

Are we out of place, or are the others the barbarians?

The turmoil of conflicting emotions takes on the energetic charge of rebellion and the nostalgic flair of the memories of the past, nature offers only a temporary shelter. Two irreconcilable emotional dimensions represent a fragmented ego, split between the longing for a comfort-zone as temporary shelter and a pervasive panic of being “lost in the wood”.