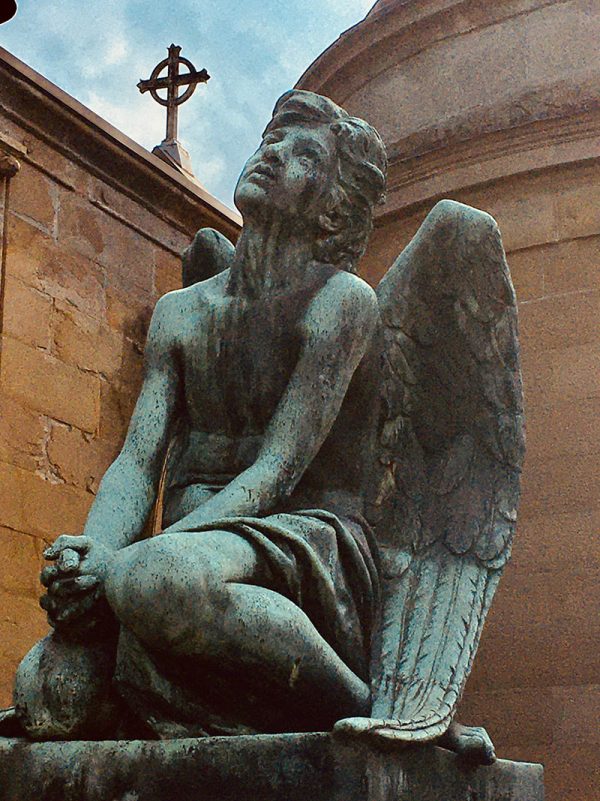 “A game of Shanghai sticks to extract one by one, knowing that if I make a mistake I lose everything.”

“A woman’s face of classical beauty breaks down into fragments, like in a Picasso painting”

“A pair of glasses suddenly shatters in fragments, a motorcycle crumbles in pieces in a parking lot, a cell phone breaks in my hands.”

“I take a taxi with an outraged angry man, I get out of the taxi but lose my suitcases, I ask two girls for help, they show me the way to the subway but to get there I have to cross a deep forest.”

“I’m searching for an old beach I loved, I want to show the beach to my grand-daughter, but I cannot find it.”

“I have to go back to Milan because of the virus, I take a motorbike but peo-ple look at me in a strange way, I park the motorbike that falls apart, I have to look for another means of transport, I am at the train station parking lot, I look for a taxi, the taxi gets on the train, the train into a ferry, I feel I’m trap-ped in Chinese boxes.”

“A Swiss friend plays electronic music, the sounds is like the sea waves, reminds me of the whales’ song.”

“I watch a movie about Switzerland, 8 soldiers walk together with 8 clowns dressed up like birds.”

“A square in the mountain at the chairlift’s arrival, I’m in front of a building with huge windows, it’s late at night, dark, where can I go? I see a small window in the floor highlighting a dining room, there in a party downstairs with many people happily drinking, I’m scared by this gathering.”

“I lost my phone and wallet at the San Siro stop of the Milan Metro, I have to go home but I don’t know what to do, I ask a woman and she points to the 3 Torri (3 Towers) stop, I think that looking from this side the curved tower looks more curved than usual.”

“I am at the seaside, alone, but I can’t see the sea, I take a small path and arrive in front of a gigantic Roman EUR-style building, inside the building there are no rooms but niches full of people clinging to each other, cheering, drinking, loud music…”

“A big and beautiful house, is dinner time, I slip away with friends, we arrive at an amusement park full of weird people, a headless sphinx, a concert, I have to get out of here.”

The Social Dreaming Matrix of April 15th 2020, the third meeting of our cy-cle of “Dreams at the time of COVID 19”, portrays a deformed, fragmented world of broken things which is hard to keep together. The dreams depict a game of Shanghai sticks to extract one by one, but if I make a mistake I lose everything; a classic woman’s face breaks into fragments like in a Picasso’s painting, a pair of glasses breaks into fragments, a motorcycle shatters in a parking lot, a cell phone breaks in hands. In the dreams we walk in a city whose streets no longer recognize, we get lost, everything that was familiar seems odd and different now, the subway stops are hidden into deep for-ests; we look for the beaches we loved in the past but we can’t find them anymore; the usual means of transport are embedded one into another, a taxi inside a train on the top of a ferry, and the journey at the end is impos-sible. We switch from one train to another, leave a party that is too crowded and find ourselves in a surreal amusement park with cracked faces and huge feet caryatids, like images of a Fellini’s movie. We get lost in the land-scape, we don’t know where we are, we ask for directions to strange char-acters difficult to trust, a blond kid with blue eyes is suspected to be the son of a murderer, a harmless old woman asks a strange electrician to screw in a giant light bulb. Is a world of huge gigantic buildings reminiscent to the Roman EUR neighborhood, old cinemas with wooden benches, and inside those scaring constructions the rooms are overcrowded with jubilant people whose cheer-fulness sounds threatening. Is a world at the eve of a tsunami, where all the rules are broken and the image of power is evoked by the face of the Italian politician Matteo Renzi slyly laughing among the general bewilderment. The journey is a research into the unknown that reminds to the Ulysses’ journey to Ithaca, the pace guided by the song of the whales capturing the passing by sailors; but reminding also to Switzerland, an apparently orderly peaceful world which hides under the surface oddly surprises, eight soldiers walking together with eight clowns dressed as birds. In such a distorted, cracking down world the wondrous overlaps with the ter-rible, the persons we meet along the way take on a shadow aspect; howe-ver, in such a dystopic world the humans are again the main protagonists, claiming back the centre of the stage.

The only representative of the animal world is now the whale, both a mam-mal and a fish, inhabitant the depths of the sea and rising with a backlash to the sky, symbol of death and rebirth, introspection and solitude. The song of the whales is at the same time fascinating and terrible, and like in the Moby Dick novel the whale evokes the perennial struggle of man at the border of destruction and rebirth.

At the end of the session a powerful image takes form, the fascinating ima-ge of a dance of transformation, similar to the Japanese butoh dance and like the “glacial tango” danced by the inhabitants of Wuhan at the reopening of the city.

Was it a dance of ghosts or a dance of rebirth? The answer remains open. In such a fragmented world, deformed in proportions, the biggest danger is the relationship with “the others”, who are at the same time helpful resour-ces and wild enemies, with whom is still impossible to establish a contact.